The Body Moves,
Guided by the Mind and Heart

Although Covid is no longer front-page news, La Plata Physical Therapy will continue with our safety and health policies. For those patients who continue to have health concerns, we have the option to provide separate treatment rooms and separate entrances into our clinic. Decisions regarding the wearing of masks will take place between the patient and the treating therapist. We will continue to offer Telehealth visits to those patients who required at home care.

Take the First Step Toward a Healthier Lifestyle

At La Plata Physical Therapy and Wellness Inc, we help patients across the La Plata, MD community feel better inside and out. If you’re suffering from pain or discomfort, we want to get to the root of the issue, helping you get back to living your life. As a local physical therapy clinic, our goal is to provide you with the individual attention and care necessary for a successful recovery.

Our professional and highly-trained staff has vast experience in a wide variety of fields, enabling them to provide the most up-to-date and effective care. Whether you’re recovering from surgery, suffering from back pain, getting back on your feet after a stroke or illness, or undergoing breast cancer rehabilitation, we take pride in offering comprehensive treatment plans to meet your specific needs. La Plata Physical Therapy and Wellness Inc offers a wide variety of personalized services and custom exercise programs to meet your needs. Our team members each carry their own unique skills and professional background to help create plans for every patient’s situation. Our warm and welcoming clinic offers six patient rooms, along with a separate room for pediatric patients. Plus, our wellness center works closely with our incredible team of physical therapists to help patients of all ages receive the continuous care they need to stay healthy and maximize their quality of life.

We are extremely health conscious, especially during the unprecedented time of the COVID-19 Pandemic. We constantly clean our rooms before and after each patient. We also have multiple entrances and exits for higher risk patients who want to avoid exposure to other people. They have the option to go directly into a treatment room. PT, Owner
Jane is originally from Northern Ireland and has been a long time resident of Charles County. Jane received physical therapy training in the United Kingdom. She began her career by working in a hospital and then later lectured in a physical therapy program. After moving to the United States, she received her license to practice Physical Therapy in Maryland. Jane is a member of the American Physical Therapy Association.

In the mid-1990’s she opened an office in La Plata. Following the tornado that hit La Plata in 2002, she relocated the office to the present location, which allowed her to expand the services that La Plata Physical Therapy provides. Jane’s personal goal is to offer quality care and to create an environment conducive to the comfort of the patient’s La Plata Physical Therapy serves. Jane also encourages continuous learning and welcomes students to join her staff during their training.

In 2009, Jane was recognized by the Charles County Commission for Women at the 12th Annual Awards Banquet for having made major contributions or given outstanding service to benefit the health, safety, or welfare of women and families in the county.

The Chesapeake Area Consortium has also recognized Jane for Higher Education (CACHE) for her ongoing contribution to student education. In 2015 David earned his Doctorate in Physical Therapy from the University of Maryland and is now a licensed physical therapist in the State of Maryland and the Commonwealth of Virginia. David has been a practicing clinician at La Plata Physical Therapy & Wellness since 2016 and most recently has been practicing Integrative dry needling after completing his competency training.

David’s hobbies/interests include golf, gardening, and hunting. He is an avid Pittsburgh Steelers and Penguins fan. 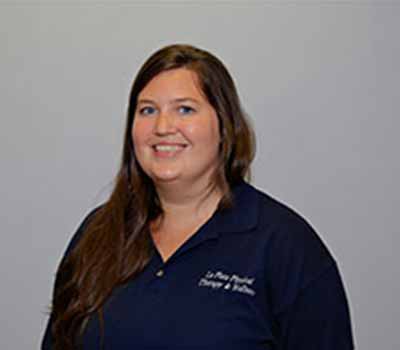 PT
Christina is originally from Belfast, Northern Ireland. She received a Bachelor of Science degree in Physiotherapy from Manchester Metropolitan University, England in 2011. Since she’s moved to the States she has completed additional courses required for her licensure in Maryland.

Christina aims to help relieve people’s pain and improve their quality of life. In order to fulfill this goal, she continues to learn and improve her skills so she can provide the best treatment possible.

She enjoys traveling and one of her goals is to visit all 50 States while she is here in America. Some of her areas of interest include orthopedics, geriatrics, and breast rehabilitation. PT
Cathy graduated in 1982 from the University of Maryland with a degree in Physical Therapy. Cathy spent many years working with the special population in the public school system. She has been on staff as part -time therapist and pediatric consultant since 2008. Cathy mentors all the staff on a regular basis and reviews our pediatric caseload. Our access to her pediatric expertise and experience is something our company values greatly. 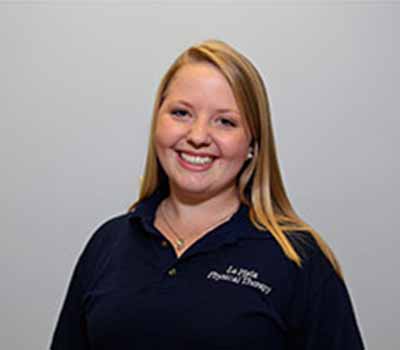 PTA
Jen is a 2012 graduate of the CACHE Physical Therapist Assistant program through the College of Southern Maryland. Jen is interested in working with pediatric patients and continuing her education in neuromuscular taping, manual skills, and orthopedic rehabilitation. She also plans to return to school to receive her Bachelor’s degree. She enjoys outdoor activities, including going to the beach, kayaking, and being with family and friends. Jen is also one of the certified Pool Operators we have on staff. PTA
Jim is a 2010 graduate of the CACHE Physical Therapist Assistant program through the College of Southern Maryland. He is also a member of the American Physical Therapy Association. Jim has continued his education by taking physical therapy courses in Maitland Australian Manual Physiotherapy and also completed a course in Comprehensive Management of the Wrist and Hand. He also helps bicyclists to attain a proper bicycle fit at the Bike Doctor, primarily working with patients with orthopedic injuries. Jim is also an avid bicycle enthusiast with the following accomplishments: Ride across the USA with Cycle America, MS 150 mile rides, self-contained tours in Utah, and multiple century/100-mile rides. Jim is a part-time PTA and is in the office two days a week. PTA
Robin was born and raised in Hammond, Indiana. The military moved her and her family to various states on the East Coast and Europe before calling Southern Maryland home in 2010. She is a 2018 graduate of the CACHE Physical Therapist Assistant program through the College of Southern Maryland. She is also a member of the American Physical Therapy Association. Eager to learn and gain experience, she is interested in developing her manual skills, helping patients reduce their pain and dysfunction to enhance their quality of life. In her free time, Robin enjoys spending time with her family traveling or being active outdoors 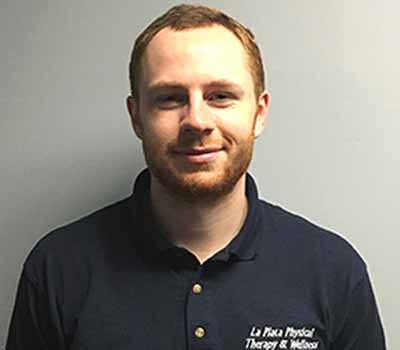 Originally from Belfast, Northern Ireland, Ben graduated in 2015 from the University of Liverpool with a Bachelor of Science degree in Physiotherapy. After completing his degree, Ben spent three years working as a Physiotherapist in England for the NHS, gaining experience in respiratory, neuro-rehabilitation, and musculoskeletal care. Alongside his NHS work, he has gained experience working in private practice and for various professional sports organizations providing pitch side services and massage therapy. Ben has since moved to the US in 2018 and has completed additional courses required for his licensure in Maryland. Hannah is from St. Mary’s County, MD and a graduate of the CACHE Physical Therapy Assistant program through the College of Southern Maryland.  Hannah’s journey into Physical Therapy began in high school when she suffered a sever shoulder strain.  As she was treated through her own physical therapy, she became interested in the process and at the same time noticed how many of her friends and family had various orthopedic issues.  From back backs to knee problems, should trouble and nerve pain.  Having always been interested in biology and anatomy, and with a strong background in customer service, Hannah pursued becoming a PTA to serve her community.  She is most interested in helping each patient in an individualized way and in manual therapy.  Outside of her work, Hanna enjoys spending time with friends, hiking, reading and crafting.

Ready to get back to living your life? For more information about our services, please contact us at 301-392-3700 today!

Get Directions
Email Us

Why Come to Us?